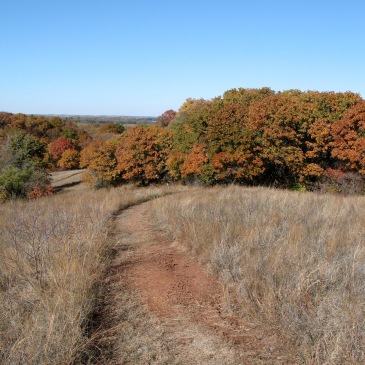 Working with landowners throughout the Cross Timbers belt within Oklahoma, we have recorded good examples of this habitat.  We have characterized the forest using vegetation transects and aged the trees using tree core samples.

Not many ancient trees are left in Oklahoma.  In the 1880s, sawmills were established in the forests of the eastern mountains. The sturdy and gnarly trees of the cross timbers were not considered commercially viable, but were used locally by settlers for fuel and building materials. The cross timbers is a transitional woodland, between the grasslands and the eastern deciduous forest. Trees on the open flats were first to fall to the ax and saw. As the cutting of trees in the cross timbers pushed back to steeper ridges and rockier hillsides, more trees were left uncut. On these less accessible, locations we now find the remnants of the ancient cross timbers forest.

Wow! What a weekend with my best biology friends! It’s the best and busiest work week of the year. I can’t believe this much fun is part of my job! . . #bioblitz #bioblitzok #myjobisawesome #naturenerds #myoklahoma #oklahomastateparks #sequoyahstatepark @standonthepiano
Less than 6 months ago, this little plot was a sad little patch of weedy lawn. Now when we go into our office, we walk past a cute flower garden that’s a habitat for pollinators! Gulf frittillary on a cow pen daisy. #gardenforwildlife #pollinatorpatch #pollinators #pollinatorgarden #pollinatorconservation #gulffritillarybutterfly #cowpendaisy
It’s BioBlitz! Week! 🙌 This weekend we’ll share our love of Oklahoma’s biodiversity with 400+ biologists and citizen scientists! 🐛🐢🐝🦇🦉🐟🦞🦌🦝🐿🐾🌱🌲🌻. The event preparation has been intense and now I have to decide on my outfit for the day! 🤪 . #bioblitzok #biodiversity #bioblitz #citizenscience #myoklahoma #biology
A lot of fun at the Monarchs in the Park festival today! #monarchbutterfly #normanok #butterflies #pollinators #nativeplants #festival #pollinatorconservation @prairiewindnursery @norman.ok.local @city.of.norman @eucheebutterflyfarm
Visiting the Ray Harral Nature Center to work on designating the park as an Oklahoma Registered Natural Area. This site qualifies because of the springs on the property, which used to be the water source for the town of Broken Arrow. . . #brokenarrowoklahoma #naturalarea #conservation #springs #instanature #protectpubliclands #naturecenter
Today’s lunch spot! #ihavethebestjob