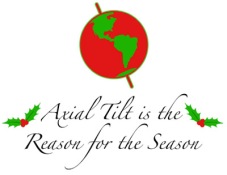 Enjoy the last day of autumn everyone.  Tonight (or maybe last night) was
the longest night of the year.  Tonight at 10:48 p.m. CST winter begins.  Personally I like the cozy feeling of long shadows and early evenings of this time of year, but I also like that it will gradually become spring again too.

The winter solstice has my biologist brain thinking about photoperiod.  Many organisms respond to changes in photoperiod, or day length.  Butterfly migration, mating of minks, fat deposition in birds, and many other biological phenomena are prompted by changes in the day length.  Dependance on photoperiod as an indicator of season is more reliable than weather – such as temperature.  If temperature triggered these actions in organisms, a cold spell in August might initiate migration too early.

Yet some organisms do respond to temperature and rainfall, many plants for example.  Bud burst – the emergence of new leaves and flowers – is directly tied to temperature in many North American trees and perennial flowers.  In fact, the warming spring temperatures over the past 100 years is shifting plant flowering to earlier in the spring, on average.

Plants changing their flowering time because of the changing temperature and animals continuing to respond to the unchanging cycle of photoperiod  may cause a problem if those plants and animals have a relationship, such as pollination or herbivory.  Flowers may be finished blooming before the butterflies return.

Earliest Blooms Recorded in U.S. Due to Global Warming

Find me on iNaturalist!