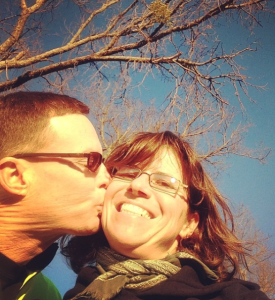 Have you received a kiss under the mistletoe yet this season?

There are a variety of mythologies surrounding mistletoe and winter traditions.  Because of my celtic ancestry, let’s hear a few from the British Isles.

Mistletoe was considered a sacred plant to the Druids.  They believed mistletoe to have many magical characteristics: healing diseases, antidote to poisons, increasing fertility, shielding from witchcraft, expelling evil, and foster good luck and blessings. According to one source, enemies who met beneath a mistletoe would set aside their weapons, greet each other amiably, and remain peaceful until the following day. This is one suspected origin of hanging the mistletoe over a doorway or in a room as a token of good will and peace to all who entered.

The revealing of mistletoe in the winter when the leaves have dropped from the trees led to the Druidic association with the sun.  During the time around the Winter Solstice, branches were harvested with great ceremony, with a special golden knife.  They celebrated the return of the sun and the day lengthening again. 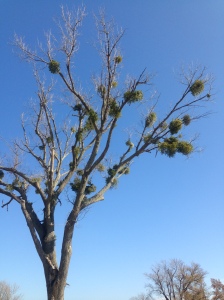 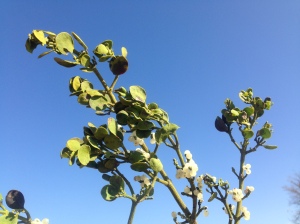 Although, I don’t believe in mistletoe’s magical myths, the evolutionary story of the sticky seeds is no less incredible.  Mistletoe is found high up on the branches of trees.  How did the seeds get there?  The fleshy white fruits that surround the sticky seed are tasty to many different birds – doves, bluebirds, robins, grosbeaks, etc…  When the birds eat the fruit, they also ingest the seed.  The birds move around and eventually have to poop out the seed that didn’t get digested.  An average small seed would fall to the ground as the bird flew, but the mistletoe seed is so sticky, even after going through the digestive tract, that it sticks to the bird’s “bottom” and has to be wiped off.  And where is that most convenient for the bird? A tree branch – thus depositing the seed high up in the tree where it can germinate, grow, and photosynthesize in the canopy.

Excellent article from Smithsonian magazine “Mistletoe: the Evolution of a Christmas Tradition.”

David Attenborough video about mistletoe and the sticky seeds that birds poop!

Find me on iNaturalist!